Close to 500 demonstrators came out in La Crosse on Friday to show the Bush regime and their puppet press that not every American is a brainwashed drone. By the end of the day, our vocal chords were drained, but we were charged by the warm and fuzzy feelings of pure joy that comes from pissing off Republicans.

Leading up to Friday’s “presidential” visit in La Crosse, local activists had been quietly circulating a strategy involving drums (the kind made from inverted food buckets) and other noisemakers, with plans to make sure the brainwashed masses inside the baseball stadium were always aware of our presence on the outside.

As my wife often tells me, “you can plan the plan, but you can’t plan the outcome.” Our plans were forced to be more “fluid” (to steal a campaign term) and spontaneous from the onset.

First, let’s set the stage: Bush was scheduled to give his stump speech in the new minor league baseball stadium at the south end of Copeland Park. This is where the La Crosse Loggers play (shouldn’t they be called the La Crosse Lagers?). This team is owned by Dan Kapanke, a Republican running for a state Senate seat soon to be vacated by Democrat Mark Meyer. Many local Republican politicians were willing to be poisoned by Bush’s coattails at this event.

The park occupies about five blocks of river front on the north side of town. About a block north of the stadium is a series of tennis courts, and the rest of the park north of that is occupied by a series of shelters. The anti-Bush rally set up shop in the big shelter at the north end of the park.

On one side of Copeland Park is the Black River, and on the other side is Copeland Avenue, a southbound one-way thoroughfare funneling traffic into the city. Its northbound counterpart, Rose Street, is a block to the east. 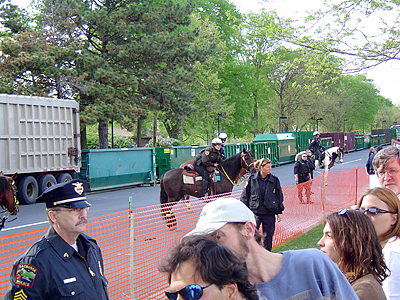 Here’s how the neighborhood was transformed for this event: Copeland Avenue and Rose Street (a major north-south artery) were both closed to all traffic in the middle of Friday afternoon rush hour. On the west side of Copeland Ave. (against the park), giant roll-up dumpsters were lined up end-to-end for several blocks. A snow fence was put up on the opposite curb, and no one was allowed to use the sidewalk on either side of Copeland. City dump trucks were parked across the entrance of every cross street meeting Copeland Avenue, and the corresponding blocks of Rose Street were also lined with snow fences.

I arrived at the park shelter by bicycle, pulling a trailer containing six drums… er, food buckets. The sound system had been set up in the shelter, and I pulled out a bucket and tried out a few test riffs. One of the organizers quickly came to me with the warning that the police had threatened to arrest anyone caught drumming. Having more important things to do than to sit in the paddy wagon for illegal drumming, the bucket went back into the trailer. 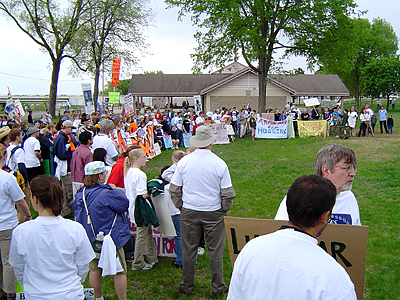 The first checkpoint for those going to the stadium was between the river and the north end of the tennis courts. Guy Wolf, one of the main rally organizers, huddled us all together next to the checkpoint behind a big “Peace Now” banner. We were told that the police will not tolerate any “noisemakers”, which included our sound system. We were also told that police were “ordered” by the Bush campaign to issue these intimidating directives.

Fortress Bush did not want their environment tainted by Democracy.

After a series of speeches were delivered through a hand-held megaphone, and the brainwashed drones had found their way into the ball park, the rally turned into a march. We went up to Copeland Avenue, only to be shunted to the east by cops on horses. We marched along the sidewalk on Rose Street until we were even with the south end of the park. Turning right towards the park, we saw the dump truck across the end of the street and turned north into the alley.

I looked around and thought, “what the hell are we doing in the alley?” But then, like a gift from On High, a vacant lot appeared between the alley and Copeland Ave. The marchers quickly filled the lot, directly facing the stadium lights rising above the high dumpsters across the street.

The police on Copeland Ave. concentrated their energy on our part of the block with an interesting mix of cops on horses, cops in suits, spooks in suits, Secret Service people in suits and in plain clothes, and who knows what else. Horses littered the street with what could be the transcript for Bush’s next stump speech. 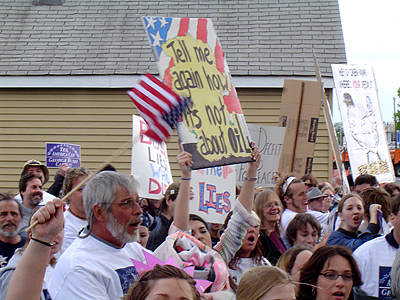 Cops told us to stay off the sidewalk while many of us said, “hey, this is a public sidewalk that WE paid for.” But they didn’t seem to have any problem with us as long as we stayed on “our” side of the sidewalk, so we compromised by six feet.

From that vantage point, we got to see the entire parade. First came a column of eight State Patrol cars with lights flashing, followed by a tow truck. Many marveled at how that was quite an escort for a tow truck. Then came motorcycles (lights flashing, of course), a series of spooky-colored vans, and then The Bus. A loud chorus of boos and thumbs-down gestures greeted the big blue bus that housed the rolling Oaffal Office. Next came many big white buses (press reports say there were eight of them) containing the press pool. They created their own traffic jam, backed up at the entrance to the (nonpublic) stadium parking lot.

The guy with the megaphone kept reminding us of how Bush was “hiding behind the dumpsters.” Popular chants were “this is what democracy looks like,” and “Bush lies, people die.” Some of the crowd had slipped up the block to the north, and came back to tell the rest of us that they could shout over the tops of the “short” dumpsters, instead of having our voices blocked by the “tall” dumpsters across the street.

So from that point up the street, we e could see drones in the bleachers, as well as the back of the stage. (I heard one report that the stage featured a flag so big, that it looked like the opening scene from “Patton”.) We were determined to make sure the minions inside remained uncomfortable, and we kept the energy level up until Bush left the stage.

So how were we to know when Bush was finished? One protester pointed out that we’d probably hear their sound system crank up with some Texan redneck anthem. When he said, “when you hear the Texas redneck music, you’ll know that Bush has left the stage.” One of the cops on horses broke out of character and snickered at overhearing that remark.

The real fun started when it was all over inside, and we went back to greet the brainwashed masses leaving the stadium. We made our way back to the tennis courts, where the Republican faithful were forced to run the gauntlet of protesters on their way back to their cars. As each little group came by, they were personally reminded that “people are dying from Bush’s lying,” “don’t believe a word he said, ’cause he’s a LIAR,” and for the military folks (who were bused in from nearby Fort McCoy in their matching t-shirts), “if you don’t wanna go to Iraq and come home in a box, you’d better vote this guy out.”

The reactions were varied and interesting. Many people just tensed up and walked on. Some waved their newly acquired Bush-Cheney signs in our faces (often upside-down). Others got angry and shouted tired old epithets like “get a job, hippy!” (I find it an interesting barometer of right-wing creativity, that they haven’t been able to find a better insult after forty years.)

An interesting comeback: “I HAD a job, but lost it in the Bush economy.”

There were also many words of encouragement, and even a hug. After all, many of the attendees were there for the spectacle and little more. Others (including the giver of the hug) received their tickets by being local business owners… many business owners are on OUR side.

But the word of the day was “fear.” Bush and his people had to hide behind the dumpsters because they fear democracy, they fear dissent, and they fear open and free expression. The diehard Republicans felt very tense, angry, and uncomfortable that we were there to burst their bubble; and to me that was the most energizing result of the day.