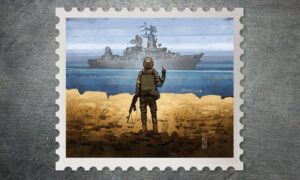 In the subways of Ukraine
People have come to sleep again
Because the bombing makes their buildings shake
The fear and stress are keeping them awake
But there’s hope in the clever tactics and persistence
Of the resistance
For they define defiance.

There is an island with a fort
Defending a strategic port
The Russian navy said “surrender now
“We’ll bomb you and take over anyhow”
The radio crackled, the reply said “Russian warship,
“Go fuck yourself.”
So says the voice of defiance.

And out in the public squares
The Russian soldiers everywhere
Face grandmas and old men who rant and curse
“This is our country, now go back to yours.”
“Put these seeds in your pocket so that sunflowers grow from your hide
“When you die”
Ominous words of defiance.

The local women can be seen
Filling bottles with gasoline.
So when the Russian tanks come rolling by
A rain of fire will fall from the sky
Till the tanks turn around and go back to from where they came
They’ll see the flames
From weapons of defiance

Wherever evil stalks the land
Defiant heroes make their stand
With such a paranoid pathetic clown
Taunting and mockery will bring him down
So let’s call that punk tyrant a repulsive piece of shit
And then let’s spit
Into his face with defiance.