One by one, 33 Chilean miners are riding to daylight on the most claustrophobic elevator in the world. They’ve been buried a half-mile underground for over two months, and after all this time, a successful rescue is in progress. As I write, it’s 22 up and 11 to go (plus some rescuers who rode the elevator down to help).

MSNBC is supplying a live video stream of the scene at the mine, and it’s hard not to be riveted by this video. They even have a camera down in the mine, where you can see this little tiny capsule with a guy in it rise up thru the roof of the room. 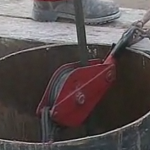 Then we go to the scene at the top. The camera zooms in on the hole, where a pulley holds the moving cable to the center of the hole. We see the wife of the miner in the capsule waiting for her husband to arrive into daylight for the first time in months, and it’s hard not to feel the tense anticipation.

For 69 days, her mate was buried half-a-mile underground, and for many of those days, there was no contact, and no way of knowing whether they would ever see each other again at all. And now she’s watching the cable rising from within the hole (how strong is that cable?), but she cannot rest until the capsule rises up out of the hole, he is out of that capsule and they are in each other’s arms.

It’s hard not to cry watching these reunions, one after another, as the afternoon goes on.

And then the harness is stashed into the capsule, it’s lowered into the hole to fetch the next guy, and the cycle repeats itself.

Even though The Rescue is going well, it isn’t over until every one of those 33 miners – and equally importantly, the handful of rescuers who volunteered to go DOWN into that hole to help them – are safely back up on the surface.

And when that time comes, Chile: enjoy your time in the sun. You’ve done something to make your country proud and happy.

UPDATE: Everybody is out of the mine, including rescuers. Apparently, everybody is in good shape, considering what they’ve been thru.