We recently came home from a week off visiting Portage and Madison. This was a trip we would normally take to beat the winter doldrums, so this year we were kinda late. On the other hand, early June is a good time to be in Madison since most of the students are gone for the summer and the locals have room to breathe.

We lived in Portage for about a year in the mid-90’s, and we had an open invitation to stay with an old friend we have there. So we took the train to Portage and spent three quiet days in the country before being delivered to our friends in Madison just in time for the weekend. 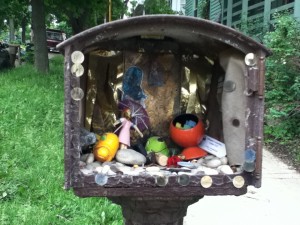 A derelict traffic light controller was converted into a whimsical grotto on Willy Street in Madison.

The first thing we noticed when we got there was an ancient and defunct traffic light controller along Willy Street that was turned into a miniature grotto by a creative member of the neighborhood. Later, we found a makeshift book exchange on a street corner.

Our favorite part of town was having a neighborhood festival Saturday, and we ran into almost everybody we still know in town. The Marquette Neighborhood Festival had all kinds of great food, music, beer, and wine, but no coffee. If someone had set up a coffee cart, they would have made a LOT of money. 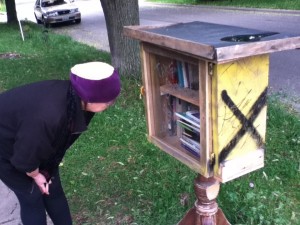 RoZ browses the titles in a book cabinet near the sidewalk bearing the words "leave a book - take a book" in a Madison neighborhood.

Last winter, there was a lot of political upheaval in the state capitol, and it continues as a prominent feature of Madison life. The focus of Madisonians is to recall Governor Scott Walker, and there’s also a strong movement encouraging Russ Feingold to run for governor in the recall election. But as visitors from “upstate”, we have a problem with this focus. The recall campaign against Walker can’t start until next winter – seven months from now. But we have a recall election against Dan Kapanke in less than a month. We’re all for recalling Walker, but first we need to get rid of Kapanke and five other Repugnantan state senators, so this focus feels premature to us. 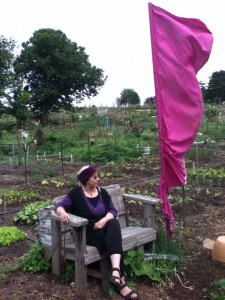 RoZ relaxes on a bench in the Eagle Heights Community Garden in Madison.

We spent a lot of Sunday with a member of Obbie’s family who wanted to show us her plot in the community garden. Expecting to see a few vacant lots converted to gardens, we were taken to the Eagle Heights Community Garden and were amazed. Hundreds of gardeners have plots that stretch out over at least dozens of acres of what was once a lakefront farm. For something like $30/year, each gardener has access to wheelbarrows, shovels and other tools; a huge pile of mulch and compost is maintained by a front-end loader on a corner of the farm; and water is piped around the farm to be easily accessible to each plot. We felt like we were in the country, even though one of Madison’s busiest streets was just blocks away. We have seen many community gardens in many locations, but nothing of this scale anywhere, and we were impressed.

We spent the rest of the afternoon killing time on State Street before a rally at 5:00 where Russ Feingold was scheduled to speak. We met and hung out with some La Crosse friends who now live in Madison while Feingold rallied the activists. There were rumors (hope? fantasy?) that Feingold would announce his political intentions at this rally, but that didn’t happen. 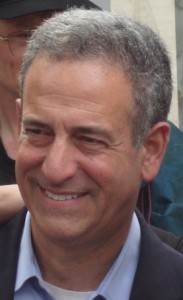 Russ Feingold is under a lot of pressure to run for governor in a recall election, but he would also be a formidable candidate for Wisconsin’s other US Senate seat which is open for the 2012 election. Some political reporters have said that he’s interested in being governor, but that was before Herb Kohl’s Senate seat became available. Whatever Feingold decides to do, we have to deal with getting rid of Kapanke and his ilk first, and he pretty much said so in his speech.

We got on a bus for home the next morning. If you buy tickets three weeks in advance, you can get between Madison and La Crosse for $24/person in three hours. It let us off at the new downtown transit center just in time to get the next city bus home.