bikepacking: backpacking by bicycle; traveling long distances by carrying overnight gear and camping along the way.

As long as RoZ and I have known each other, we’ve wanted to go bikepacking. Since we moved to La Crosse, Wisconsin in the mid-90’s, we’ve had easy access to a premier network of bike trails. Most are part of the “rails to trails” movement: reclaimed rail beds with gentle grades far from highways and traffic. With plenty of places to camp, our part of the world is made for bikepacking. 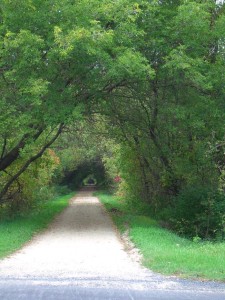 A typical bike-seat view of one of our local Wisconsin trails.

Our shakedown trip was on our upright bikes, with our camping gear packed into a trailer designed for toddlers. We chose an easy route (The Old Abe trail near Chippewa Falls) that’s flat, paved, and only about 18 miles in each direction. We parked at one end, camped on the other, and rode back the next day.

The ride itself was easy, but the ergonomics made us miserable. We learned that five miles is our limit before our butts, necks and wrists start hurting. To make bikepacking a habit, we would have to find a way to make it more comfortable.

Let’s try recumbents
We found a campground along the Elroy-Sparta trail that rented recumbents made by BikeE (a relatively affordable and commonly available brand at the time, defunct since August 2002). So one weekend we rented a pair of them for a 30-mile day ride. That ride convinced us that recumbents would work for us, though the BikeE was not the right recumbent. 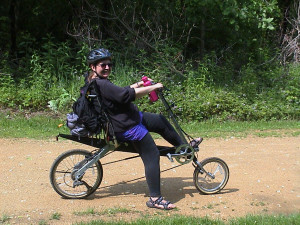 The BikeE was very comfortable and easy to adapt to, but it seemed to require more effort to ride than it should have. A co-worker pointed out that the tiny wheels on a BikeE give it a more rolling resistance. So we needed a bike with bigger wheels.

Finding the right bike
I started doing research on recumbent tandems, and narrowed the search to bikes with a drive wheel at least 26 inches in diameter. The best resource at the time was the online catalog of the Hostel Shoppe, a bike shop in Stevens Point that specializes in recumbents.

I read online discussions where other cyclists shared their experiences with these bikes. That’s where I learned tandem lingo like “stoker”, “captain” and “timing chain”; and that discussions on the “right” angle between the captain’s and stoker’s pedals can be quite contentious.

After eliminating the bikes that were too expensive and those that were too cheap (cheap bikes are a waste of money, but that’s a topic for another day), the choice was narrowed down to models from Vision and Rans. The Rans model looked like it might be more sturdy structurally, but we chose Vision because its frame comes apart in the middle, which makes it less of a hassle to ship or transport.

On our way to the Midwest Renewable Energy Fair, we paid a visit to the Hostel Shoppe to try out one of these bikes. When we saw the midnight purple specimen hanging on the wall, we knew it was our bike. We spent about an hour riding it to make sure, and made a list of accessories and add-ons.

By the time the energy fair was over, our bike was ready for us. We took it apart to bring it home and put it back together once we got there. That turned out to be the only time we’ve had to do that, but it’s good to know that we can. 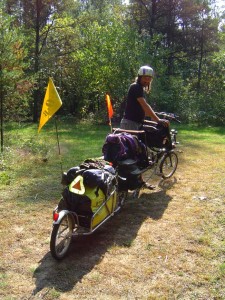 Obbie guides The Limo and a fully loaded BOB trailer from the campsite toward the trail.

Our toddler trailer would not work with this bike because its hitch is incompatible with the Vision’s frame. The BOB trailer, on the other hand, was designed with bikepacking in mind. It attaches to the ends of a specially-designed quick-release spindle in the rear axle, so it’s no problem with this bike.

Meet The Limo
From end to end, our bike is exactly ten feet long, and the trailer adds about three more feet. With its comfortable riding position, low profile and crazy length, it is like driving a stretch limo; so it quickly became known as “The Limo”. Controlling The Limo is like steering an extension ladder down the road, or piloting the bicycle world’s version of an eighteen-wheeler. It’s long.

How is it to ride?
The ergonomic benefits of recumbent riding are not to be understated. The types of pain we endured on long rides on our “wedgie bikes” is gone, even though our legs still feel the ride. Pushing our weight over hills and down the trail is no less work.

There are a few disadvantages, mostly related to the inability to “stand up” on the pedals. That extra burst of power you would get from standing on the pedals while climbing hills is no longer available, so we ordered smaller front sprockets for a slightly lower gear ratio than that of normal bikes. We also can’t stand up to ride over bumps, so we had to develop a technique to lift our butts off our seats long enough to bounce over rough spots.

On an upright bike, it’s easy to mount and start up in the same motion, and it’s easy to dismount while stopping. On a recumbent, these are all separate tasks… mount, launch, stop, dismount.

What we did not anticipate was toe numbness. When riding a recumbent (at least ours), you sit with your feet forward and your toes pointing upward. Eventually, the blood drains from your toes and they become uncomfortably numb. So every 20 to 30 minutes we pull over to put our feet down for two or three minutes… long enough for our toes to feel normal again before pressing on. 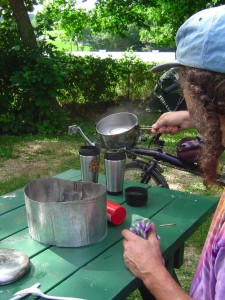 Making morning coffee to get the day started.

How far do you ride?
During prime riding season, we’ll try to take a 30-mile-plus day ride at least once a week. When time is short we’ll “do laps” on a 2.25-mile loop thru our part of town with long stretches of smooth and uninterrupted street riding.

We are not among the “Taipei riders” who regard every ride as a stage of the Tour du France. On bikepacking trips, we typically go between thirty and forty miles in a day.

We’re leisurely about getting started, so our day starts when Taipei riders have already been on the trail for hours. We also take lots of breaks to rest our toes and/or take pictures, so we’ll spend most of the day getting three or four hours of riding time.

The Limo has taken us on quite a few notable bikepacking trips:

Is it comfortable?
Comfort is the whole point of a recumbent. For us, we couldn’t go more than five miles on an upright bike before it became uncomfortable. It’s still work to push ourselves down the trail, but it’s the only way we can routinely do rides of thirty miles or more.

Is it hard to get used to?
We tried single-seat recumbents first. Once we got used to the position (which took less than a minute), it was no problem.

Actually, the tandem part was harder to get used to than the recumbent part. Communication is key on a tandem, as neither rider wants to surprise the other. For instance, unanticipated sudden moves by the stoker can affect the bike’s balance and the captain’s control.

Our bike’s manual recommended that the captain ride solo long enough to get used to the bike before adding the stoker. We followed that guideline and found the adjustment to be surprisingly easy.

Did you build that?
Of course not. 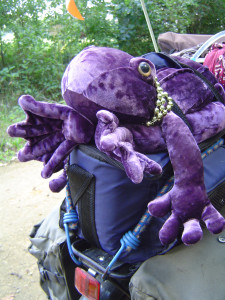 Gorf chills on top of the cooler.

What’s with the velvet frog?
Our bicycling mascot is named Gorf, and in addition to social outreach and other expected mascot duties, he has an important task to fulfill on all of our rides. Our bikepacking gear includes a foam cooler that rides on our rack, and its ice pack lives in a compartment directly below the lid. On sunny days, the ice can melt quickly if Gorf is not there to insulate the cooler from the direct sunlight.

On day rides, we carry our lock and cable on the back of the bike (along with a few other small items). Gorf’s job on those rides is to cradle the padlock in his feet so it doesn’t rattle and clatter against the rack, scaring wildlife and small children.

Speaking of small children, they love to pet him, and he loves the attention.

How much did it cost?
About the same as we were paying for about six months of health insurance back in those dark days before Obamacare. As it turns out, The Limo was much more beneficial to our health than that health insurance was.

You could also say it cost about what you would pay for an inexpensive but clean and reliable used car.

All right, if you must know, it was about $3,500 for the bike itself. But we also needed accessories and add-ons to make it easier to use: centerstand, over-the-seat steering (a back-saver pushing the bike up hills or into parking spaces), a rear drum brake, cargo rack, seat-back bags, fenders… by the time all of that was added in, we were paying about five grand.

This happened at a time in our lives when we had enough extra money to make investments, and we regarded this as an investment in our health. Now that we don’t have money, we still have the limo, and it still benefits our health. We would not have been able to take long rides without it.

Looking ahead to our fifteenth riding season, we regard The Limo as one of the best investments we ever made. After all, it’s likely to add at least ten years to our lives. The investment pays off with every ride. 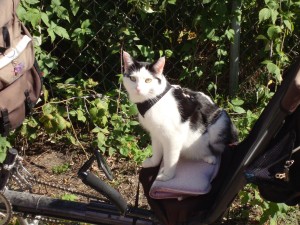 Gizmo wants to go for a ride, too.

It can be fun to be a spectacle
Riding The Limo is enough of a joy without adding in the way people react to it. Dogs that have a habit of chasing bikes often stop and look at us with either confusion or awe. We routinely hear kids in yards calling out, “Look at that cool bike!” As oncoming riders pass on the trail, we’ll frequently hear “wow!”, “ooo!” or “it’s a tandem!” in their voices fading behind us.

The Limo has done wonders for our physical and mental health, it’s introduced us to countless curious onlookers and will be a continuous source of stories for years to come. 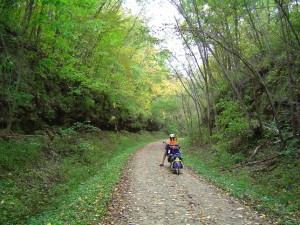 We’re out of the tunnel, and ready to roll down the hill.

4 thoughts on “The Limo – Bikepacking on a Tandem Recumbent”