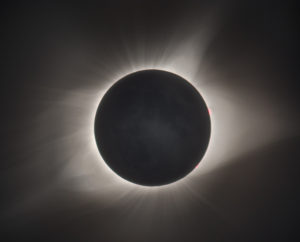 On the morning of August 21, RoZ and I were in Service Creek, Oregon for the total solar eclipse. We were with our friend Sage, his 8-year-old son Cosmo and their greyhound Serendipity.

We had driven 300+ miles from Seattle the day before and camped on the roadside near an old back-country stage stop. After marveling at the high-desert skyscape, we got a good night’s sleep and had breakfast at the stage stop in time for the big event.

The early and middle parts of the partial phase were familiar. Edges of shadows get sharper, and looking at the sunlit landscape is gentler on the eyes. But in the minutes before totality, things started to feel weird. Even though we were bathed in sunlight, it suddenly felt as cool as it was the night before.

We heard a voice in the area call out, “two minutes,” and later, “one minute.” The light became obviously dim, and it began to flicker.

This is when the adrenaline kicked in. Our minds knew what was going on. But feeling the sunlight dim so suddenly defies reality, and my reptilian brain reacted. Thru the welding glass I watched the last sliver of sunlight disappear, and I pulled the glass away to see a sprawling star with a hole in it.

A collective gasp went up among our fellow travelers at the roadside. It was dark, but more like late twilight than midnight (after all, the sun was still shining about twenty miles away). I could see a handful of bright stars, but not enough to recognize any constellations.

We were struck most by how star-like the corona appeared. We know in our minds that the sun is a star, but this experience allowed us to know that in our hearts. Most photographs of a total eclipse only capture a fraction of the complex structure of the corona sprawling in all directions from the sun itself.

I snapped a few photos with our digital SLR, knowing it was futile. After a peek thru the binoculars I quickly passed them on. We could all see a deep orange area off the upper edge of the Moon, but by the time I could get another close look I saw the diamond ring of returning sunlight and heard myself calling out, “Diamond ring, glasses on!”

The sunlight came back and there were hugs and joyful tears. My words at the time were “overwhelmed and overcome” mixed with a dose of giddiness. I felt like a kid who had just survived an intense thrill-ride wanting to say, “let’s do that again!”

A panoramic view of the roadside from which we observed the total eclipse of August 21, 2017.

The eclipse was a late-morning event, and since we are not morning people, our plan was to get into position the night before and camp there. In the weeks leading up to our trip, I spent a lot of time scouting locations with this awesome Google map. The idea was to find a spot with clear skies, minimal traffic, and high tolerance to roadside camping.

Coastal Oregon had too much potential for fog and low clouds. The Willamette Valley (Salem, Albany, Corvallis, etc.) was likely to be sunny but crowded (Friends in Corvallis sent links to local news stories about apocalyptic gridlock, and of being advised to prepare as if for a natural disaster). In the rain shadow of the Cascades, the town of Madras looked like an optimum spot: clear skies and a magnificent view of the darkening Mt. Jefferson. Unfortunately, too many other people had the same idea. Madras was madness.

I looked further east and liked the layout of the riverbanks near Service Creek. We could avoid the I-5 corridor by taking I-90 to US-97, and then back roads to avoid the Madras madness. At first Sage (who had a long-planned beach party on Saturday) suggested we go to “the closest place within the path,” so we looked at points east of Salem. As fears of traffic Armageddon spread, he agreed at the last minute that my “back door” plan was a good idea after all.

As we drove out of Seattle on Sunday afternoon, the only traffic we saw was going in the opposite direction.

In Biggs Junction, OR, our gas station attendant asked, “are you heading south?” “Yes.” “Well, enjoy the circus.”

We watched the sun set behind Mt. Hood as we drove along the high desert ridge-tops. We saw thousands of wind turbines just as the red flashing lights activated on the tops of their towers. They flashed in sync with each other. From one vantage point, it looked like an entire city of red lights was blinking in unison.

Occasionally we’d encounter another vehicle on its way to the eclipse zone, but we encountered no traffic whatsoever on our way to Service Creek. At about ten o’clock we parked in a roadside pull-out that I expected to be packed by then. Sage and I walked toward the store to make sure it was OK to park and camp there and met the owners – Randy and Linda – just as they were about to go home at the end of a long day (“We’ve been here since 7 this morning.”)

They had hoped to allow camping on the grassy area between the parking area and the creek, but the local authorities wouldn’t allow it. Self-contained vehicles were OK, but our plan to pitch a tent would attract attention. They suggested some camping/fishing areas a few miles down the road.

Before we got back to the van, they’d changed their minds. We could parallel-park the van, and pitch the tent on the grass behind it. The tent would be hiding behind the van, and if anyone asks we could tell them that Randy and Linda gave us permission to camp there. (Sage: “I didn’t need to bring my cook stove, ’cause we’re gonna have breakfast in their cafe tomorrow morning.”)

Looking back at our campsite from the grassy area below.

Sage and Cos slept in the van while RoZ and I slept in the tent. Before dawn, we heard steady traffic on the road. We emerged from our tent to find both sides of the road packed with parked cars. I could hear a neighbor reciting our timetable for the eclipse. The partial phase didn’t start for another hour, which was just enough time for breakfast.

Traffic was more of an issue on the return trip, but we avoided the worst of it.

Totality had barely finished when cars started leaving, kinda the way a theatre empties out as soon as the closing credits start to roll.

We savored the experience and waited for partiality to end before breaking camp, then we spent much of the afternoon frolicking in the river nearby. It was after 5 when we started back. Traffic was heavy but not enough to slow us down (our long and frequent stops did that).

In Wasco we joined US 97 and those leaving the Madras madness. The ten miles from Wasco to Biggs Junction was the parking lot we were warned about. Like many other travelers, we were forced to take an unscheduled roadside break because the dog couldn’t wait any longer.

• On Sunday night we were sitting in our lawn chairs gazing at the Milky Way, and a guy went wandering by looking for a port-a-potty. We said there wasn’t one around, and tactfully asked what type of port-a-potty usage he needed. It was only a “number one” and he continued on his quest. When we saw him wandering back, Sage asked if “everything came out all right,” and his answer cracked us up: “I finally found something sufficiently important to pee on.”

His name was Teddy, and we invited him to sit with us. Teddy fashioned a pinhole viewer from a cylindrical potato chip can while he and Sage pondered the ideal energy drink. Teddy: “What do I do with all these chips?” Sage: “I’ve got an eight-year-old boy on board who would LOVE those.” 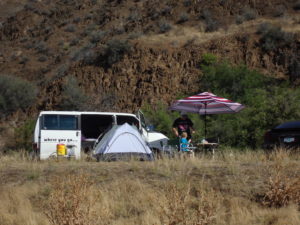 Sage, Coz and “the rig” at our campsite in Service Creek, OR.

• Cos likes to play a word game. He announces a word’s first letter along with some hint, and our mission was to guess the word. In the afterglow of totality, he asked Sage and RoZ to guess a word that begins with ‘e’ and has to do with space. RoZ’s first guess was “Earth”, followed by “Enterprise” (as in the starship). Good guesses, but no cigar.

I came wandering into the conversation and said, “Eclipse, duh.” Cos agreed. “Duh!”