I’ve heard many commentators refer to the “bongo drums” at the various Occupy Wall Street actions, and it kind of annoys me, mainly because it’s inaccurate. The term is mainly used to belittle and ridicule the occupations, but I’ve heard it used by people on “our side” who should know better. The most appropriate term to use would be “hand drums.”

Many years ago, I built a website for a maker of hand drums. (I won’t link to his site, as I was never fully paid for it, but that’s another story.) In the process I learned a lot about hand drums, and what all the variations of hand drums are properly called.

The most common drum you’ll find in public drum circles is the conga. Check out this picture from the Washington Post web site…

In this picture, we see (from right to left) a red conga, a blue conga, a snare drum behind it, a blue floor tom (another “kit” drum), a red conga, a tan conga, and an improvised steel drum. No bongos. 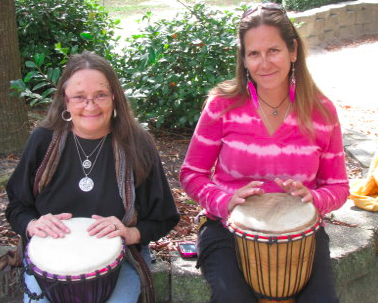 These women and their djembe drums were at an occupy rally in Myrtle Beach, South Carolina. (photo by a right-wing blogger)

This picture was posted for ridicule by a right-wing blogger from South Carolina who infiltrated the local occupy rally to gather fodder for his mean-spirited rants. He prefaced this picture with, “they even had bongos.”

No, they’re djembes. You don’t know what you’re talking about. 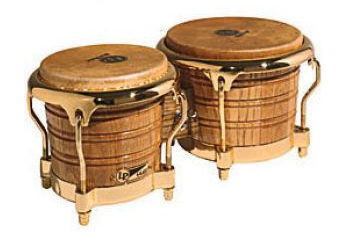 THIS is a set of bongos.

Bongos are indoor drums. They are small… far too small to be heard in the midst of dozens of congas, djembes, floor toms, snares, and hundreds of dancing and howling revellers; so they are rare in large public gatherings of drummers. 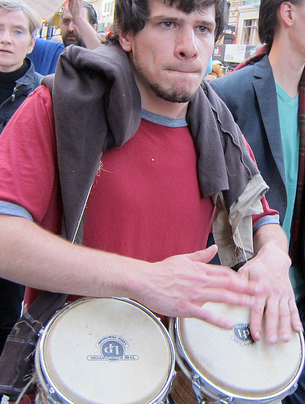 A bongo player struggles to be heard at a march in New York. (photo by Scott Lynch, "Scoboco" on Flickr)

The only place I could find a picture of a bongo player at Occupy Wall Street was from somebody’s Flickr stream, and this guy looks like he’s working really hard to be heard above the ambient noise of downtown Manhattan.