I went to a ribbon cutting today. A new bridge for bicyclists and pedestrians finally opened on the north side of La Crosse, connecting neighborhoods on one side of a railroad yard with workplaces on the other. But this was a celebration that was many years overdue.

The new “Bud Hendrickson Bridge”, seen from its eastern approach, spans the BNSF rail yard to connect the north side of La Crosse to the the industrial park and a bike-friendly route to Onalaska.

For those unfamiliar with La Crosse, the following map illustrates the barrier this bridge overcomes. 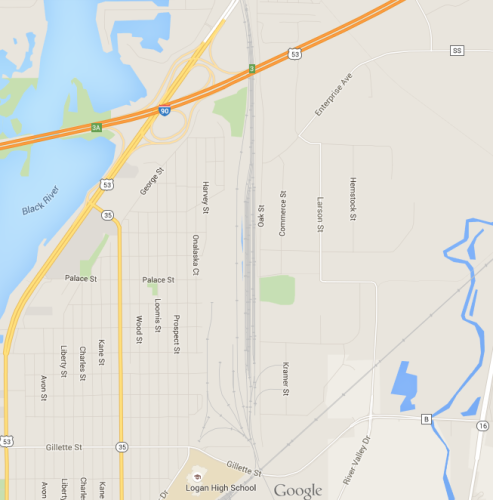 Back in the 1990s, some friends of ours who lived on the north side and rode their bikes to get around looked at the top part of the map (zoomed below), and suggested that if there were a way to follow the red dotted line across the railroad yard, the industrial park and Onalaska would be much more accessible. Without the bridge, they had to detour a mile to the south to cross the tracks legally, or fight highway traffic to cross the interstate. 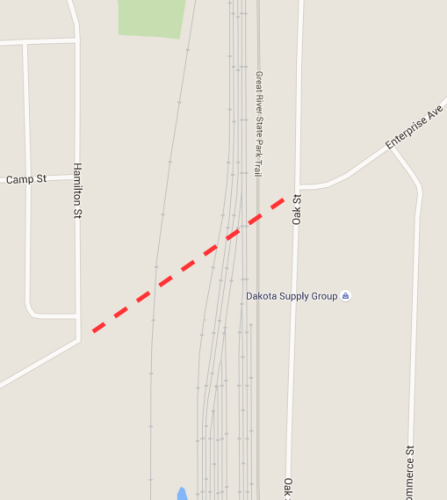 City officials said, “That’s a great idea!” and applied for state and federal funding. The right people agreed that it was a great idea, and offered funding for the bridge. The only obstacle left was the railroad.

The railroad said “no,” and since that day in the 90’s, they’ve been little more than dicks about it. They made excuses, dragged their feet, and threw up roadblocks at every turn. They did everything they could do to keep that bridge from being built.

So why now? Why did the railroad finally quit resisting? Why was a ribbon finally getting cut today?

A year or two ago, this very same railroad wanted to lay more track thru the city to accommodate more oil trains. Citizens all over the city raised hell. One concern was the habitat encroachment and environmental damage on the La Crosse Marsh from the new road bed. Then there’s the increasing number of bomb trains passing so close to so many homes.

The railroad didn’t need the city’s approval for this new track, but they apparently knew the city could be dicks about it and make excuses, drag their feet, and throw up roadblocks at every turn. It seems quite a coincidence that when the railroad needed the city’s cooperation for new track, construction was allowed to proceed on the bike bridge. (By the way, at this writing construction continues on new track thru La Crosse.)

I arrived at the ribbon cutting after following a new trail that runs alongside the west side of the rail yard from near Logan High School to the bridge itself. At the entrance of the bridge was the expected huddle of onlookers, city officials, and reporters listening to the mayor give a speech about what a great thing this is. Then he started to thank the people who made the bridge happen, but when he started to thank the BNSF railroad, I couldn’t let that pass. 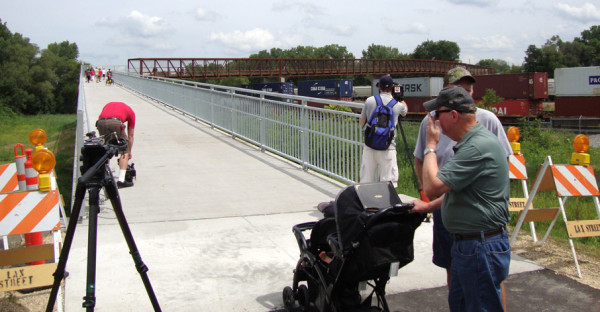 The Bud Hendrickson Bridge, as seen from its western approach on ribbon-cutting day, provides La Crosse cyclists and pedestrians a safer and more direct route from North Side neighborhoods to the industrial park and Onalaska.

I suddenly became the heckler in the back. “If it hadn’t been for BNSF, John Medinger would’ve been cutting that ribbon at least ten years ago.” (John Medinger was this mayor’s predecessor who served from 1997-2005. Both these mayors are overall decent guys who are sympathetic to progressive outlooks.)

Mayor Kabat said, “what?” and gave me a chance to repeat my statement more clearly, so all could hear (Thanks, Mayor Kabat).

Reactions were mixed. Some scolded me for “being negative” on a “good day”. Others came up and said, “I really appreciated your comment!”

I agree that it’s a good day, but we must still acknowledge that it’s at least ten years too late. And we also shouldn’t be asked to applaud a corporation who did everything it could to prevent this day from happening.

But from now on, if we want to visit friends on the north side after a day on the bike trail, they won’t be so far out-of-the-way.

UPDATE – It looks like I accidentally photobombed the local TV news report of this event. You can watch the video here.

After a fifteen-second ad, the report lasts for sixty seconds. Pay close attention at :20 and at :35.