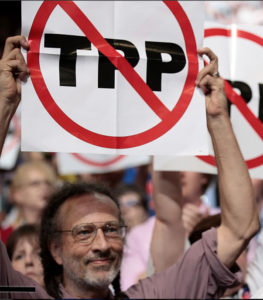 I grew up reading MAD magazine, and a common element of portrayals of crowd shots on TV was someone holding a sign that said, “Hi Mom!” I started thinking about this after coming home from the Democratic National Convention, around the time the emails and text messages started coming in that started with, “I saw Obbie on…”

The first such message came from RoZ’s brother on the Sunday evening after the convention. He had seen me in a report on a Showtime political show, and offered the following image: 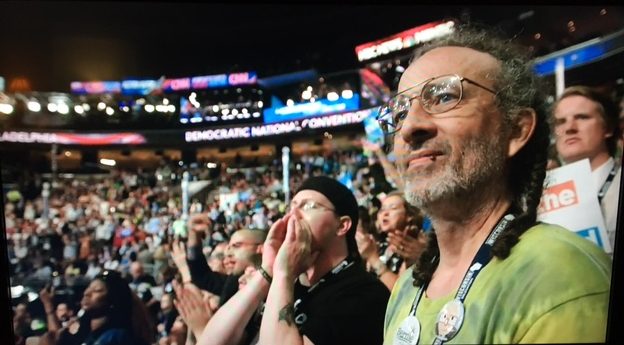 I remembered the camera coming by as I sat along the aisle during roll call Tuesday night, which was confirmed in the brief video clip he sent along to show the context… a clip where my mug was visible for about a quarter-second.

So while my brother-in-law was ribbing me about my “fifteen minutes of fame”, it wasn’t even fifteen frames, and most people didn’t even notice.

I found some other stuff while looking around for a video that I still haven’t found. On the first night, I was in the second row up from the main floor and watched as a CBS News crew set up to interview someone in the first row, directly in front of me. While the crew was live, I remembered this advice from George Carlin:

This is something you can do for practical…humor. Do this on television; if you can get into a kind of a side of a television story…, the kind of thing where you’re not the center of attention ’cause they’ll edit you out if you do this as the center speaker. You must be on the sideline. And what you do is you don’t say this, but you move your lips to it. And what you move your lips to is- “I hope all you stupid ******* lip readers are looking in!”

So I tried that. I also mouthed the words, “Hi, Rozie.” As the crew was setting up, I sent her a text that read, “go to CBS,” and a few minutes later a text came back that read, “I just saw you, love.” I never did find any video of the interview that took place right in front of me that night, but while looking for it I found this: 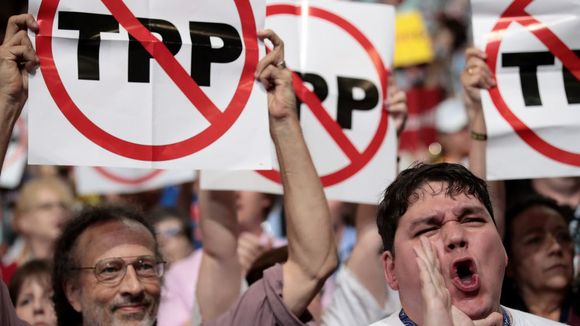 This was found in the online version of USA Today (embedded in an article about the hell we raised at Ron Kind’s appearance before the Wisconsin delegation breakfast on Wednesday). While the guy to my left was going ape-shit every time a speaker mentioned Hillary’s name, every camera in the building seemed to converge upon him.

The next day, a friend emailed us a smartphone-picture of a page from the dead-tree version of the New York Times containing the same picture (Page B4 on Wed, 7/27). On Monday of this week, we received the actual paper in the mail, so I upgraded the picture a bit: 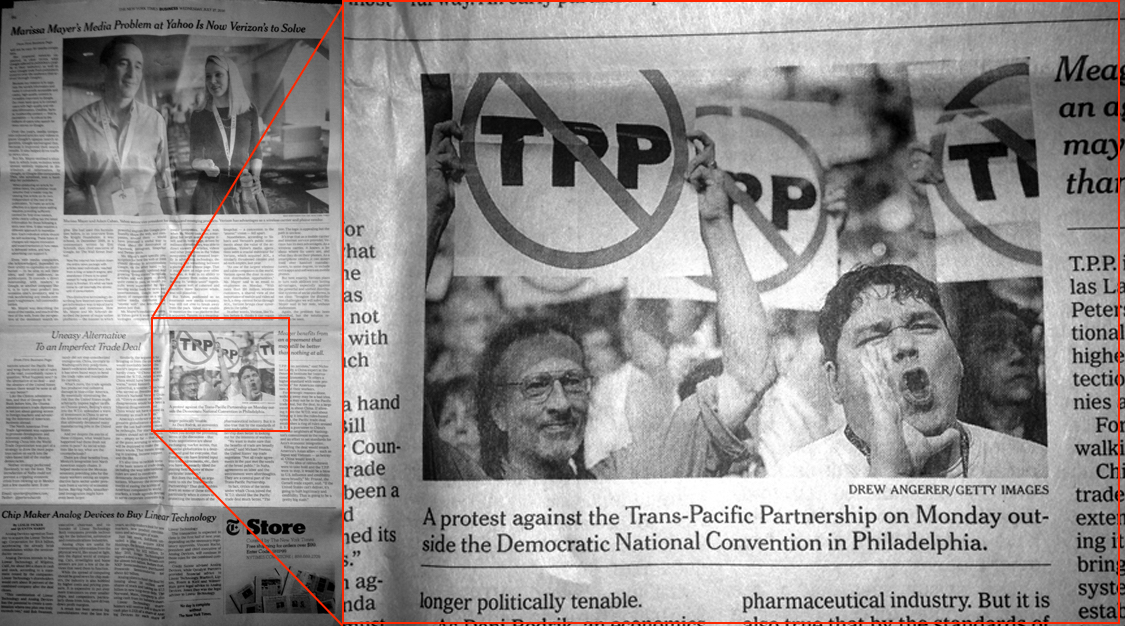 Unfortunately, the caption said the picture was taken outside. A correction was requested, and one was issued about a week after the story ran.

A picture caption on June 27 with the Economic Scene column, about the Trans-Pacific Partnership trade deal, misidentified the location of the photograph showing delegates to the Democratic National Convention protesting the agreement. It was taken on the floor of the convention hall, the Wells Fargo Center — not outside the building.

Did they really say “June 27” when the image was published on July 27? The Old Grey Lady is slipping.

Relaxing at home one evening last week, we watched one of Bill Maher’s shows from convention week, and during the “New Rules” segment we saw this: 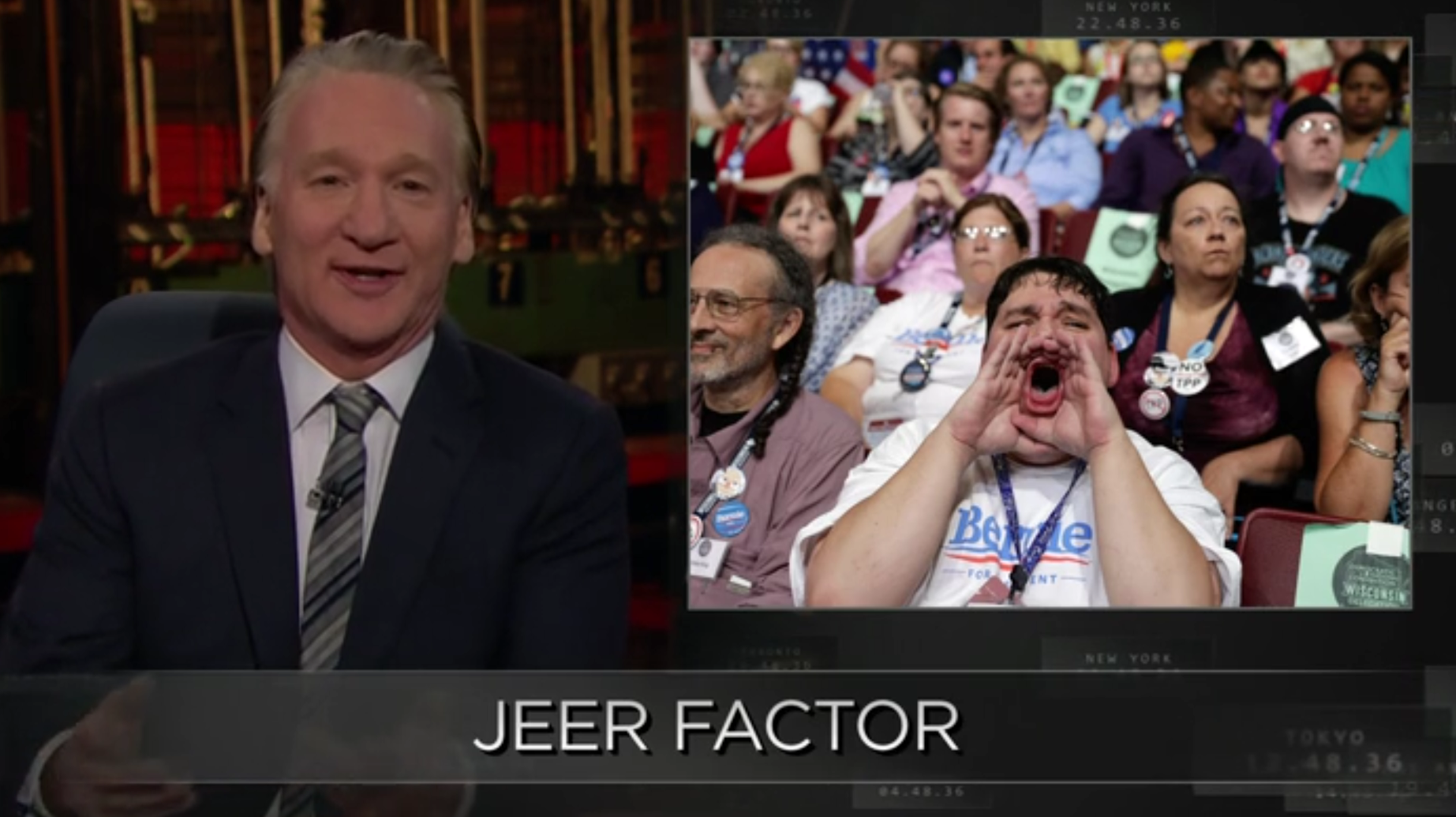 It looks like I was trying really hard to make it clear that I was not with this guy.

Just to complete the collection of what I’ve found so far is this one that I came across yesterday (Tuesday): 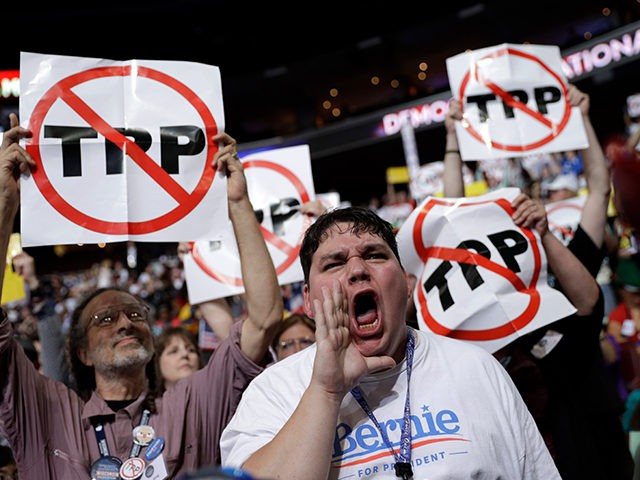 I was there for four days, but nearly all the pictures I find of myself in the media were taken within seconds of each other. And the only reason I show up at all is because I was sitting next to a camera magnet.

I know there are at least three videos out there where I was directly interviewed on-camera. The first was taken on the second day while I was sitting on the aisle in my green & gold tie-dye, but I have no idea who the crew was with. On the fourth day I was interviewed in the hallway by “Italian TV”, and on the floor by “Norwegian TV”. If anyone happens to have copies of these videos, I’d love to see them, if only to find out whether they translated my comments correctly.

Now that I’m home, seeing myself in the media isn’t that much of a thrill relative to the feeling I get when I watch news reports as DNC events reverberate thru the country. For instance, I keep seeing clips of Michelle Obama or the Khan couple, and as I realize how these events are now part of political history, it blows me away to remember that I was actually there.