Our situation: We’re OK, and our house is OK. There’s a small corner of our metal roof that’ll have to be nailed back down, and some pieces of our neighbor’s maple tree that need to be picked up, but our “damage” is minor compared to others within a block or two of us.

Read our storm story after the jump, and look at our photo gallery of the aftermath. 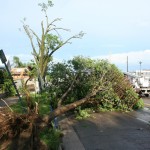 An uprooted tree from the tornado in La Crosse on May 22, 2011. In the background is a porch torn from the front of its house. 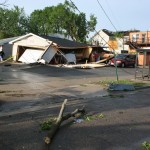 This garage near the corner of West Ave. and Green Bay St. collapsed during the La Crosse tornado of May 22, 2011. 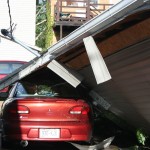 This car appears to have sustained little damage from having this garage collapse upon it. 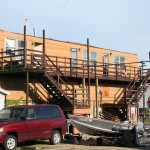 This apartment building lost its roof in the La Crosse tornado of May 22, 2011. 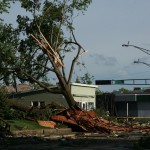 This tree was severely damaged by the roof that flew off the apartment building across the street during the La Crosse tornado of May 22, 2011. Note the lumber wedged into the top of the tree. 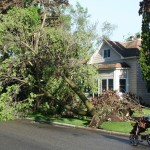 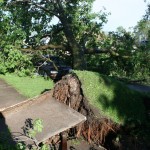 This large tree was uprooted by the La Crosse tornado of May 22, 2011. It lifted a large portion of the sidewalk, and sprawled across a parked car. 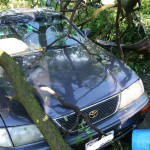 Given the size of the tree that fell on this car, it’s surprising it didn’t cause more significant damage.

This uprooted tree barely missed a parked car, but it was enough to close a street following the La Crosse tornado of May 22, 2011.

There was no consistency in the direction that trees fell. 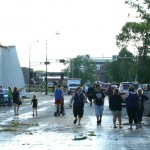 Local residents take advantage of a major street closure to assess the state of the neighborhood following the La Crosse tornado of May 22, 2011. 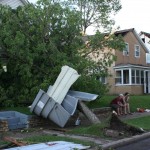 Debris from a nearby building materials retailer litter a yard under an uprooted tree. The home in the background also shows significant damage. 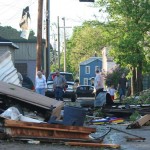 Debris from a collapsed garage covers an alley following the La Crosse tornado of May 22, 2011

A large metal building owned by a building materials retailer suffered serious damage in the La Crosse tornado of May 22, 2011. 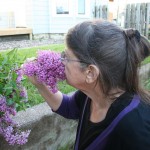 In the aftermath of a tornado, the lilacs were still there to enjoy.

As I write, the power has been out at our house since the beginning of the storm. That means no TV and no Internet (we don’t do the cell phone thing). Our landline phone works, but it’s only good for things like telling your mother that you’re OK.

We have a battery/hand-crank radio, but all we can get from it is weather reports,and storm warnings for places east of us. So we have absolutely no reliable source of news, no way of knowing how this storm affected the rest of our city or our region, and no way of knowing whether anybody was hurt. All I can tell you about this storm is what we learned walking around our neighborhood after the sun came out.

The battery on our laptop is good for a few hours, so I write in hopes that I can copy and paste these words into our blog once the lights come back on.

At roughly 4:30 this afternoon, the sky got dark, it started raining hard, and the wind picked up. I looked out the window toward the garden, and I saw garbage cans flying down the alley. Then I heard The Hum… it sounded like wind whistling thru trees, but it had a low pitch, like that of a bass flute or a tuning fork… only it sounded like two or more tuning forks, each with a slightly different pitch. This sound only lasted for a few seconds while the lights flickered. Just as RoZ suggested we might want to unplug our sensitive electronic equipment, everything went dark.

That was almost six hours ago, and it’s still dark.

We grabbed the weather radio, and it told us we were under a tornado warning. (We need to ask the civil defense people why we never hear tornado sirens when a tornado’s been spotted heading our way.) We rounded up candles and other parts of our emergency kit, but by then the peak of the storm (what we later learned was “the tornado”) had passed, even though the wind was still blowing as hard as I’ve ever seen it.

After the rain had let up for a bit, people in the neighborhood went outside to take a look around. We didn’t have to go far before we could see trees down and metal torn from buildings. We got to see our neighbors long enough to reassure each other that we were OK, and then it started raining again. Another wave of storms was passing thru town with a lot of rain and not as much wind.

Sometime around 6 o’clock, the sun came out. Since the power was out, there wasn’t much to do other than take a walk around the neighborhood. Everybody else in the city had the same idea. I’ve never seen this much foot traffic in a residential neighborhood outside of New York. So we got to encounter many of our neighbors and spend time swapping storm stories.

One neighbor, who lives two houses east of us, said he saw a tornado. This is when we learned that we had just experienced a tornado. He said the tornado was on a course northward toward our part of the block when it suddenly turned east and entered the neighborhood a half-block east of his place. He was very pleased with our luck with this storm, and so were we.

Between our corner and the end of the next block we found downed trees, porches torn from their houses, a collapsed garage, bent signposts, and numerous damaged roofs. The major intersection a long block away was closed to traffic from all directions, so lost drivers clogged the streets of our neighborhood looking for a route to replace the one they found unavailable. Unfortunately, these drivers had to navigate streets criss-crossed with uprooted trees.

On one side of the closed major intersection, a cheaply-built apartment building had its roof torn off. The roof blew into a tree across the street, and the wind pushed the tree over. There were all kinds of building materials scattered around, much of it hanging in the treetops: lumber, shingles, metal roofing, foam insulation. The streets were littered with everything from sticks and branches to twisted metal and pieces of buildings.

Cars seemed to be very lucky – at least in our neighborhood. We saw three cars that could have been crushed by trees or a collapsed garage, but they all looked like the trees fell in a way that gave the car a gentle dent rather than any crippling damage.

With so many people walking the streets, the aftermath of the tornado had a strange festive element. We all are in awe at the power of nature and marvel at what the wind can do. And this was one of those times when this was pretty much our only choice of what to do. It was fun to meet all of our neighbors to celebrate our fortune that things could have been worse, but they weren’t.

And as I finish writing at 11:15, the lights are back on. Time to get the Internet working again and send this out.