The Beaver House was originally built as a farm house in the Kickapoo River valley north of La Farge in the early 20th century. As most houses built during that period, its wood frame was built from large, dense and durable wood… virgin timber indigenous to the region. Many homes from that era remain sturdier than similar homes of much more recent vintage.

The Beaver House was so solid that it survived a move of nearly 20 miles, over a ridge and into the next valley along steep and winding roads. In the late seventies, construction started on a dam that would have put the Beaver House at the bottom of a lake, so the house was picked up and deposited on a piece of land in the headwaters of the Pine River valley north of Yuba.

It came into the hands of some friends of mine who’d established a fledgling community in the area in the early 1990s, around the same time I came to Wisconsin from California in a beat up old step van, looking to start a new life after having gone thru a divorce from another community (a long story that I’ll get into sometime, but not now).

Fortunately, the dam was never finished, and much of the land that was to become a lake is now the Kickapoo Valley Reserve, and the rest is held by the Ho Chunk Nation.

Unfortunately, the relocation of the Beaver House was left with many important tasks left poorly done or unfinished. The foundation was a series of solid vertical slabs of unreinforced concrete, so the uphill wall quickly gave way. There was a spring about 150 yards from the house, but there was no well and no proper outlet for waste disposal. The driveway was a rut path with no gravel that frequently became a car-swallowing mud hole.

But the Beaver House did have many worthwhile amenities… electricity, a phone line, a roof with integrity, a wood stove, and some of the finest countryside Wisconsin has to offer. The glaciers never came thru to level the land as they did elsewhere in the state, so the landscape is one of deep and narrow valleys carved out of ancient rock. The Driftless Region has the closest thing to mountains that you’ll find in Wisconsin. Visitors likened it to Vermont and Arkansas.

I spent about six months at the Beaver House in 1992. I worked on improving the living space itself, to make it more livable, as well as some outdoor work such as making the driveway more reliably passable. Meanwhile, I had to find ways to support myself.

It was from the Beaver House that I published my first book. (All right, it was a 16-page instruction book on how to make beer that was printed and stapled together at a 24-hour copy place in Madison, but still… it was a book, and I published it.)

I also rushed to make about 30 cases of beer to sell in the parking lots of the upcoming Grateful Dead summer tour. (The idea was to show Deadheads that they didn’t have to buy and sell corporate labeled beer… that they could make their own instead.) Batch after batch got cooked up on my portable propane stove in the Beaver House “kitchen”.

The green hills, hardwood forests, and crisp clean air at the Beaver House reminded me of what I loved about the state I had been separated from for so long. And it was a great place for reflection and solitude, which is something that I needed at the time.

The Beaver House was a place for doing things outside… but that was because you HAD to do things outside: fetch water from the spring; find, gather, haul, and cut firewood; go up the hill to bury the bathroom waste. The other problem was that there was no way to make a living without driving long distances. As idyllic as the Beaver House was, it was obvious that I couldn’t spend the winter there.

So I left in the fall to start another phase in my life, and the Beaver House went thru the subsequent phase in its own evolution. It hosted a series of residents who each bonded with the place and made their own improvements to it.

For reasons too complicated to explain here, the Beaver House has been inhabited for the past few years by someone who allowed it to fall into decline and disrepair. All reports were that the Beaver House we had all known and loved was gone.

This week, we learned that that metaphorical absence was now literal. A prairie fire on the property got out of hand, and took the Beaver House with it. 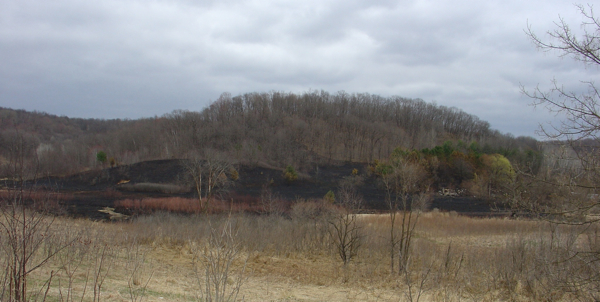 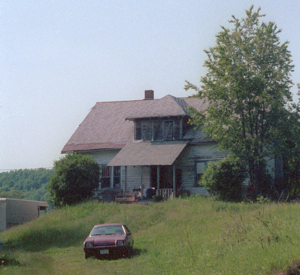 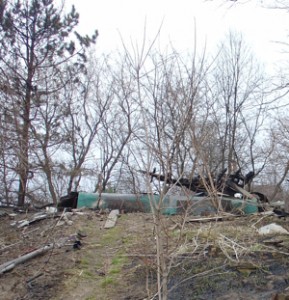